Buying a Pre-built PC is one of the best solutions for those who are not into the technical stuff of assembling the components to build a PC. It makes it a whole lot easier for a normal user to buy a PC with an excellent set of specifications in a pretty well value-for-money package. Many people are looking for a gaming Pre-built PC but are also very tight on the budget to spend on just the PC. This article will benefit you as here I have listed the best Pre-built gaming PCs under $500.

Finding a Pre-built gaming PC at around $500 was a pretty challenging task for me. This is because a few pre-built PC providers are actually providing value at this price point. But you don’t have to worry at all. I have managed to bring out the best possible pre-built PC for you under the $500 mark that can be used for gaming purposes for sure.

Buying Guide –  How to Choose the Best Pre-built Gaming PC under $500?

The Pre-built gaming PCs are no different, and all the rules that apply to any other gaming PC while buying also apply to budget PCs under $500. While buying a gaming PC, especially a pre-built one, the following things should be kept in mind:

The CPU is gonna be the most responsible thing for the primary processing of all things. And in order to build the foundation of a smooth-performing PC, there can’t be a compromise with the processor. Under a $500 budget, it’s obvious that you can’t get one of the latest processors from AMD and Intel, but there are still many options from the older generations. You can choose a processor that provides at least 4 cores and a good clock speed of around 3 to 3.5GHz.

This hardware component is just specific to gaming PCs but is one of the crucial ones. And due to budget constraints, the GPU that you’re gonna get will also fall in the category of the older generations. The GPU you’ll get at this price will serve you to play most esports titles like Fortnite, PUBG, and CS: GO with medium settings at around 30-40fps. But you can’t expect to play high-end AAA titles at playable framerates.

Gaming can cost a lot of RAM at times, but since this is an entry-level prebuilt gaming PC, you don’t have to look for a lot on high-end DDR4 RAM sticks. I often recommend 16GB of RAM for a gaming PC, but for this specific article, neither it’s possible nor needed to go for 16GB of memory. You can be easily well and good with 8GB of RAM, and even if it is DDR3 with high frequency, it’s good for this kind of PC.

Game files are some of the heavies files on a computer, and hence a gaming PC should have at least a combination of SSD and HDD storage to cope with the requirement of huge storage. But this kind of combo storage is not possible on a $500 gaming pc.

In that case, you should give priority to SSD. I know SSDs cost a lot more than HDDs and come with less storage, but they are fast. And I guess there will be no point in having a big HDD storage if your PC is lagging due to slow storage. So, I would recommend you to get at least 240GB of decent SSD storage.

You can read my in-depth comparison of SSD VS HDD VS SSHD, which will further clarify your doubt regarding PC storage. 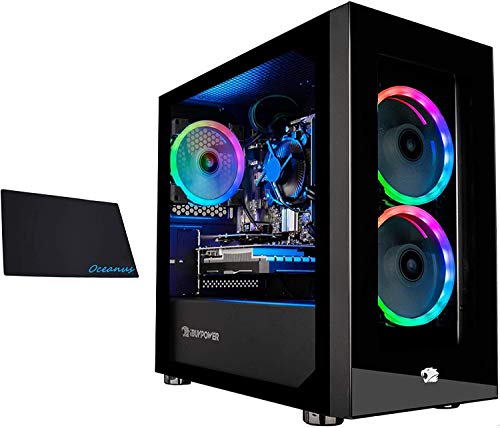 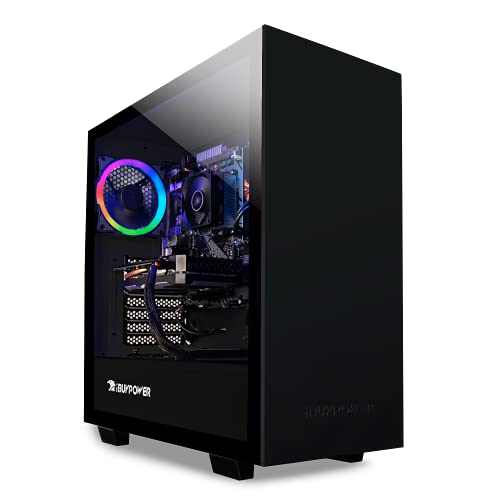 Starting our list with a pre-built gaming PC from iBUYPOWER. This gaming PC comes with an AMD Ryzen 3 3100 CPU, a 4 core, and 8 thread CPU with a base clock speed of 3.6GHz. It is built on 7nm power-efficient fabrication and has a maximum boosted clock speed of up to 3.9GHz.

It has a dedicated GPU which is the AMD Radeon RX 550. This GPU comes with 2GB of dedicated video memory, which is of GDDR5 type. This GPU has a clock speed of 1183MHz, which is pretty nice for lag-free gaming.

The next listing is also from iBUYPOWER. This one is the iBUYPOWER Pro Gaming PC. If you’re planning to go for a PC with HDD storage due to budget constraints, then this is a pretty good option for you.

This PC has the AMD Ruyzen 3 3100 CPU that consists of 4 cores and 8 threads with a base and boosted clock speed of 3.6GHz and 3.9GHz, respectively. And for the graphics, the CPU comes with the Nvidia GeForce GTX 710 GPU that serves 1GB of dedicated graphics memory to the user.

The Alarco Gaming PC is also a pretty nice pre-built gaming PC that costs less than $500. For the price, this gaming PC serves a very good set of hardware specifications. The CPU packs an Intel Core i5-2400 CPU that consists of 4 cores and 4 threads for processing power. This CPU has a 3.1GHz base clock speed that can be boosted up to 3.4GHz via overclocking.

The GPU used inside the cabinet is the Nvidia GeForce GTX 650, serving a total of 1GB of GDDR5 graphics RAM. The memory clock speed of the GPU is 5.0Gbps. The B75 LGA 1155 motherboard holds 8GB of DDR3 RAM and 1TB of HDD storage.

Looking for a PC that has a newer CPU generation? Have an eye on the Acer Aspire TC-895-UA9 pre-built gaming PC. This PC has the 10th gen intel core i5-10400 CPU. It is a 6-core CPU that comes with 8 processing threads. The base frequency is 2.9GHz and can be maxed out up to 4.3GHz.

As for graphics processing, the PC has the Intel UHD Graphics 630 integrated graphics embedded within the CPU. However, there is no dedicated graphics processor in this PC, but the CPU can handle low to medium-level gaming pretty easily. A 12GB of DDR4 RAM runs at 2666MHz and has been coupled with 512GB of NVMe m.2 SSD storage. It also has an 8X DVD writer if you’re into that.

The connectivity of the PC is also pretty nice. It has Intel Wireless Wi-Fi 6, Bluetooth 5.1, and Gigabit Ethernet LAN. Talking about the ports, it has 1x USB 3.2 Type C Gen 1 port, 5x USB 3.2 Gen 1 Ports, 2x USB 2.0 Ports, and 2x HDMI Ports. It comes with preinstalled Windows 10 along with a free USB keyboard and mouse. To be honest, this is not a gaming-centric laptop, but given the strong hardware, it can handle some heavy games. But there is no dedicated GPU on this prebuilt gaming PC.

HP is also not lacking behind in the game. It also has something for you. The HP Desktop PC comes under $500 and is also good for gaming. It comes with the AMD Ryzen 3 4300G Processor. This processor has 4 cores and 8 threads for awesome processing. The CPU has a base clock frequency of 3.8GHz that can be boosted up to 4.0GHz. Along with that, the CPU is also equipped with the integrated AMD Radeon graphics, having 6-cores and 1700 MHz of processing speed.

The PC comes with 8GB of DDR4 RAM running at 3200MHz speed and a 512GB of PCIe NVMe SSD storage for fast performance. It has Wi-Fi 5 and Bluetooth 4.2 for wireless connectivity and 8 different gen USB ports. This is another laptop that primarily doesn’t focus on gaming. But its 4000 series AMD processor allows it to manage some heavy gaming. Subsequently, it lacks a dedicated GPU, which is the prime focus for a gaming PC. You can avoid this if you want immersive gameplay because there is no RGB case.

Last but not least, the Entry Gaming 10-core computer serves some of the best specifications at an extremely affordable price. The PC consists of an AMD A10 9700 CPU, a 4-core CPU with a base clock speed of 3.5GHz, and can be boosted up to 3.8GHz. There is also an AMD Radeon R7 graphics card with 4GB of video memory for graphics rendering and gaming. The system can provide 60fps in Fortnite, 40fps in GTA V, and 50fps in CS GO at normal settings and 720p resolution.

The PC also has 16GB of DDR4 RAM accompanied by 512GB of SATA III SSD. I/O segment of the PC consists of 4x USB 3.0, 1x VGA, 1x HDMI, 1x GBIT-LAN, 2x USB 2.0, 3x Audio jack, AND Wi-Fi. There is a 400W power supply for powering all the components inside the RGB cabinet. Overall, this is the cheapest gaming PC on our list. But we don’t recommend this if you can stretch your budget to nearly $500. If you are on a very tight budget, you can consider this option.

What is the best pre-built gaming PC for under 500 dollars?

The $500 budget is so constrained that there are not a very handful of choices out there. This can easily lead a consumer to buy a less valuable prebuilt gaming PC. Talking about the best pre-built gaming PC,  we recommend going for either iBUYPOWER Mini or iBUYPOWER Pro if you want a good gaming experience.

It depends on what’s the definition of a “good gaming pc” in your mind. Usually, what you’ll get under $500 as a gaming pc is not going to cope with your high hopes of getting smooth fps with high graphic settings and high resolution. But if your goal is to play normal games at normal graphics at a playable framerate, then the $500 gaming PC is gonna work for you.

Is it bad to buy a prebuilt gaming PC?

I would say no. It’s not at all bad to buy a prebuilt gaming PC. I do admit that prebuilt gaming PCs do not bring the best possible value for the money. But It is a fact that it saves your time to research, buy, and then assembling for each individual piece of hardware for your gaming pc. Plus, if you don’t know how to assemble a PC, buying a prebuilt PC is the best option.

So, these were the best possible prebuilt gaming PCs that you can have under a $500 budget. You can choose any of the listed gaming PCs as I have researched, further assure you that no other prebuilt gaming PC can provide better value than these at this budget. All the listed PCs are from popular prebuilt PC manufacturers, and every single one of them comes with at least 1 year of warranty.

I hope this list of best Pre-built Gaming PCs under $500 will be helpful for you in making and improving your buying decision. If you have any queries, suggestions, or want me to appreciate, then feel free to use the comments section below. And I’ll catch you in the next one.

You May Also Read:

The word "IT" itself defines Information technology, and there is no need to tell that you need a computer machine to work in this...

Laptops have become an essential part of our life nowadays due to the evolution of technology. Most professionals prefer portability, and laptops come in...

ABOUT US
InternetOutsider.Com is intended to offer the best buying guides, PC Build, Laptops, and relevant tech accessories. It is a participant in the Amazon Services LLC Associates Program, an affiliate advertising program, where we earn a small commission after every successful purchase.
Contact us: [email protected]
FOLLOW US
© 2020-22 InternetOutsider.Com- All rights reserved